I actually didn’t know about all the bleeding that takes place after giving birth. No one really told me about that. I just thought you pushed out the baby and the afterbirth and that was that. I didn’t reflect on it being attached to the wall of the uterus . Or that it would leave a big wound in the uterus when it came off. Did you know that it is normal to bleed between 4 to 6 weeks after giving birth?

It’s recommended not to use tampons or menstrual cups because you have a wound that can get infected. It’s not like being on your period. At least not at first. You’re bleeding quite a lot. Most hospitals will provide you with disposable panties during your stay but when you leave, you’re on your own (it’s a worldwide tradition to steal a few).

This is when the need for postpartum underwear kicks in. Like me, you might have “period panties” that you’re not particularly careful with. The wear and tears. But you’ll probably won’t be very comfortable in these as you need to put a giant medical pad (best sanitary pads after delivery) in them. The best underwear after delivery have a little different design than normal underwear. A little bigger and a little wider to make room for everything. And if you have gone through a c section, you’ll need something else entirely.

The best underwear after delivery

There’s no right and wrong here. It depends on what you like and what you need. Then there’s the matter of quality and comfort of course. But let’s start with the essentials. Consider these 4 steps to find the perfect post delivery underwear: 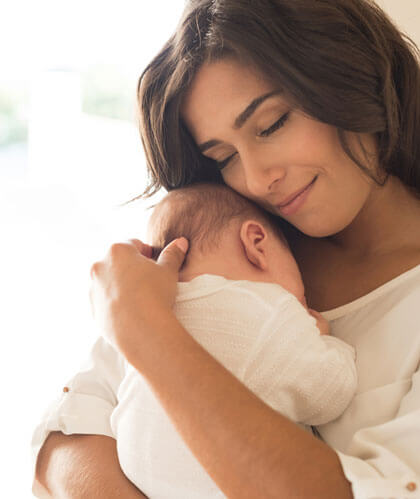 The best disposable underwear after delivery

Before buying disposable underwear I did imagine that there would be a few to choose from. I was not ready for the dense jungle of styles and brands to choose from. There was nothing to do but dive right in. I don’t know which ones you will like the best, but I have made your choice a lot easier. I have gone through tons of reviews and found some that are loved by many. Here are my favorites.

After scouring the web and reviews I have come to the conclusion that Always discreet and Depend Silhouette are the most liked disposable underwear available. They’re pretty and feminine, have elastic legs that prevent leaks and have great absorbency.

The material is breathable (super important for healing and not getting an infection) and very comfortable to wear. Nothing like super thick pads that makes you feel like you’re wearing a diaper. You’ll get comfortable, safe and cute underwear no matter which one you choose.

They also cost about the same (make sure you look at the package size when comparing). Both are available in S to XL.

Buy Depend Silhouette from Amazon.com →

Coming in third on this list doesn’t make this disposable underwear after delivery an inferior choice. Just a different one. They are not super feminine and cute like the other two but are designed for comfort and healing. That’s why they’re oh so soft, breathable and seamless. The waistbands are not elastic which makes them perfect for both natural birth AND c-section.

Unfortunately, we never know what’s going to happen when we give birth. With these, you’ll be prepared for whatever comes your way.

If I haven’t been clear enough about it yet, you need to put a pad in these. They are not absorbent like the other two. But they are great for keeping pads (and ice packs) in place. You can even wash them a few times before disposing of them. It’s a great choice if you don’t want to ruin your regular underwear and still want to wear pads.

Get these mesh underwear from Amazon.com →

I haven’t gone through a c-section myself, but I have both a sister and friends that have. And I understand that it’s quite a painful ordeal. Even if everything goes according to plan. It takes about 6-8 weeks to recover and we’re talking about major abdominal surgery here. So on top of all the postpartum bleeding you will have to deal with a wound. A wound that sits right about where your underwear lining is. And you don’t want anything that shafes against that scar. Think high waist and loose fitting.

There are a lot of great underwear to get that are designed for the time after a c-section. They’re both comfortable and helps with recovery.

C-Panty is the only patented postpartum c-section underwear that provides everything you need for C-section recovery. Or that’s what they say. I think there are other great options, but I have to agree that they seem pretty awesome.

The compression C-Panty reduces swelling, discomfort, irritation, minimize scarring and protects the incision area. All which speeds up recovery. It also helps to banish that incision bulge. You’ll get some support from them which makes it easier to move around.

Finally, the underwear helps to give you a nice post baby belly and figure. You can wear them immediately after surgery.

Buy yours from Amazon.com → 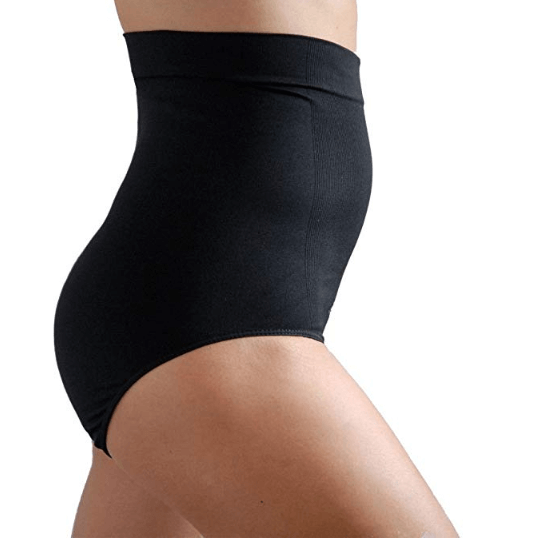 If you want a pair of underwear to wear after surgery that looks like regular underwear and also takes care of your postpartum bleeding, Thinx period panties might be something for you. I think this is so smart. You’ll kill two birds with one stone.

These Thinx period underwear have a comfortable high waist (nowhere near the incision) and you don’t have to wear those super thick pads. They hold up to 4 regular tampons worth of fluids.

The best part might be that you can wash them and reuse them time and time again. This is great for both nature and wallet. You can keep wearing them during your periods later as well. This might be the best underwear after c section in my opinion.

A cheaper option for postpartum underwear

If you want to spend a little less on your post delivery underwear Kindred Braverly has a cute and price worthy 5-pack. They’re designed to hold post surgery dressings or postpartum maternity pads in place. Protecting you from embarrassing leaks.

The underwear are very soft, doesn’t dig in to your skin and sit nicely above the c-section line. There are a couple of different color combinations to choose from.

If you’re planning a c-section, I think it’s wise to at least consider some sort of specialized underwear as it will help you and be so much more comfortable. I would definitely do anything I could to speed up my recovery and prevent infections.

The best washable underwear after delivery

If you’re not a fan of disposable products there’s a whole lot of washable options. And no, I do not many your regular underwear. We are taking things a bit further here. I’m talking about underwear that is specifically designed for postpartum needs.

Modibodi has a wonderful and genius reusable Maternity collection. A fairly new addition is the postpartum control brief. Here you get the combined benefits of protection from postpartum bleeding and shapewear.

It’s made of recycled fabric and has an absorbent antimicrobial lining that fights odor/bacteria and also repels stains.

I really can’t recommend period underwear enough. It’s great for the environment , so comfortable and great for recovery as it keeps you dry (preventing bacteria from growing). And you can keep using them as period underwear even after all baby business is done.

Here’s a great deal for you. Modibodis’ maternity pack. You get 3 maternity briefs (the low cut kind that goes under the belly) AND a maternity singlet.

The briefs are awesome to wear during pregnancy. They’re super comfortable as they are super low cut. The belly can grow as much as it wants. And they absorb any leakage that might happen (I’m talking about pee). After giving birth you can use them for the bleeding. You can of course keep using them as period panties. or for when you need to do those pelvic floor exercises. Win-win-win.

The maternity singlet is for breastfeeding. Boobs tend to leak. Instead of using disposable pads you can wear this washable option. Super convenient and sustainable.  And one advantage with the washable underwear is that they’re so much more stylish than the disposable ones.

I know I’m raving about Modibodi underwear now, but I love them. They have great quality and design. For all stages of life. From teen to woman to mam to old. Keeping you leak free all through life.

I recommend the Maxi 24H absorbency because it holds up to 10 tampons worth of fluids. That can come in handy the first couple of days after giving birth. They’re also perfect to wear throughout the night those first days of your period when the flow is just that, a flow.

We’re all different, but I bleed a lot more every month after my 2 kids. These have saved med hours of precious sleep, keeping me safe and comfortable.

Check out all Maxi 24H styles at Modibodi.com →

That’s pretty difficult to answer if you’ve never tried any. But if you’re on your second or third pregnancy you might have some good advice to share with the rest of us.

If you’re interested in more after delivery stuff, take a peek at the “best nightgown after delivery” and some lovely “delivery robes“.